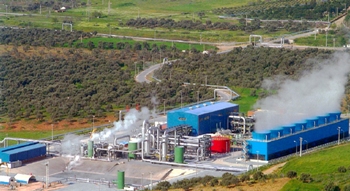 Mitsubishi Heavy Industries (MHI) (7011:JP) has received an order for a steam turbine from Gurmat Electricity Generation for the second 47 MW-unit at the Germencik geothermal power plant (pictured) in Turkey.

The No.2 unit at the plant, which is located 60 km south of Izmir, Turkey’s third-largest city, is slated to go on stream in 2015.

The associated generator will be provided by Mitsubishi Electric Corporation.

This latest deal marks the second steam turbine to be supplied by MHI to Germencik. In 2008, the Japanese OEM delivered the steam turbine for unit No.1.

Securing new power generation sources is a major issue in Turkey because of tightening power supplies caused by the country’s robust economic growth.

Within the renewable energy arena, the Turkish government is putting forward several initiatives to promote the exploitation of its abundant geothermal energy resources.

For unit No.2, the electricity generated is expected to be subject to a ten-year feed-in tariff programme.