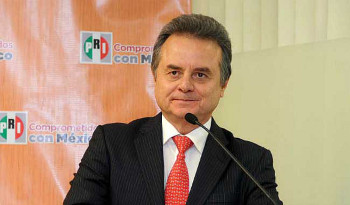 The energy reform carried out in Mexico has reached the final stage of its regulatory period. The approval of the rules that will develop the reform is imminent. This was announced by Pedro Joaquin Coldwell, Energy secretary of the federal government (pictured). Coldwell said during Mexico’s Business Summit 2014 that there will be approved 25 rules.

The reform has entered its first stage of implementation, called Round One. There will be put out to tender exploration blocks and oil and gas extractions. Public and private companies will take part in the bid. There will be offered 169 blocks overall. According to news reports, 109 of those blocks are exploring projects, while the rest are extraction plans.

The federal government wants to hold two other rounds, one per year. An Investment of about $50bn is expected to come to Mexico within the 2015-2018 period.

The Energy secretary said that the previous rules of bidding will be classified according to the kind of deposit or field. The first classification includes shallow waters, whose bid will be held within November’s first fortnight. After that, during December’s first fortnight, will come extra-heavy oils. And in the first two weeks of January 2015 the bid for non-conventional resources will be held. Besides, in this last stage will be include the bids for Chicontepec oil field, located in the state of Veracruz.

Their previous rules of bidding will be issued within the first two weeks of February 2015 (terrestrial resources) and the same period of the following month (deep waters).

The Energy secretary said that the first contracts will be signed between June and September 2015. Thus by the end of that year the energy reform will be fully implemented.

One of the main changes that the energy reform will bring is the introduction of five-year plans for hydrocarbon tenders. The National Hydrocarbon Commission (CNH) will be the entity that submits each five-year plan to the Secretariat of Energy. This will be done every March in the year concerned. The Contract Areas Five-Year plan will include the tender plans and the contract areas characteristics at least. After that, the Secretariat of Energy will issue the first five-year plan within the first semester of 2015.

Other variation brought by the energy reform’s regulations is a change in the energy devices’ security rules if they use natural gas or liquefied oil gas. The changes in security matters will affect the supply installations, among other things.

The reform will bring changes in the Mexican Oil Institute (IMP), which will keep belonging to the Secretariat of Energy but from now on will be ruled by a board of directors composed of nine members.

Geothermal energy will receive special treatment. This renewable energy source has a potential of 61,178 GWh per year, but currently only 10 per cent of that amount is generated, according to figures from the National Energy Institute. Mexico is the world’s fourth country with biggest geothermal reserves. This fact drove the approval of a Geothermal Law that establishes specialities for this energy source. For instance, exploration permits and concessions will be directly negotiated with the Secretariat of Energy. Before the Geothermal Law it was compulsory talking to the Energy Regulatory Commission (CRE).

An article by CNN Expansion mentioned four key points for the energy reform’s success. The first point is transparency, which will be achieved if the contracts signed by the companies always respect the law. The contract’s concession will not depend just on one institution but four entities: the Secretariats of Energy and Finance, the National Hydrocarbon Commission and, in the case of petrol, the Mexican Petroleum Fund.

The second point is the clarity of the rules, especially what concerns to environmental protection and conditions of participation.

Protection of competition is the third point. The Mexican government will guarantee competition rules that allow home companies to compete under the same conditions with big multinational companies.

And the last key fact is the state-owned company Pemex’s transformation. During the last seven decades Pemex held a monopoly in the energy sector. Now it is the time for Pemex start to “think as a business” as was claimed by its finance manager Mario Beauregard.