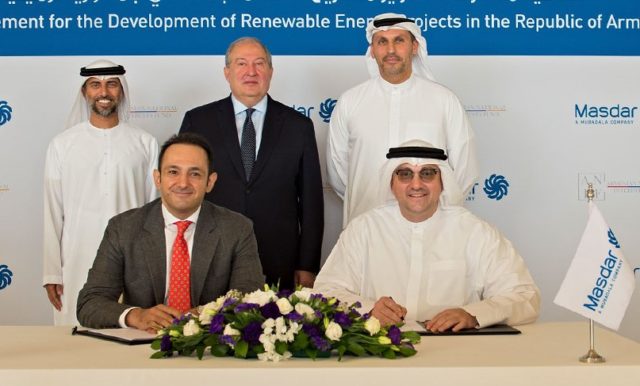 Abu Dhabi-headquartered clean energy company Masdar has signed a deal to develop solar projects with a total capacity of 400 MW in Armenia.

The agreement follows the signing of a memorandum of understanding in July between Masdar and the Armenian National Interests Fund for the development of renewable projects, including fixed and floating solar PV and windpower.

The first project planned is a 200 MW utility-scale solar PV plant in the west of Armenia that will use cutting-edge bifacial technology to produce electricity from both direct and reflected sunlight.

“That is an important reason why we have been able to move forward in our partnership with ANIF so swiftly.”

ANIF chief executive David Papazian added: “Masdar and ANIF are making good on their promise to deliver industrial-scale renewable energy projects in Armenia. Our two teams have gelled as a single unit over the past few months, and I am happy to report that we have sent a highly competitive written proposal to the government of Armenia which outlines the details of the 400 MW of solar PV that we are jointly proposing.”

Armenia has pledged to generate more than a quarter of its domestic power needs from renewable sources and hopes to cap its carbon emissions at 633 million metric tonnes of CO2 equivalent between 2015 and 2050.