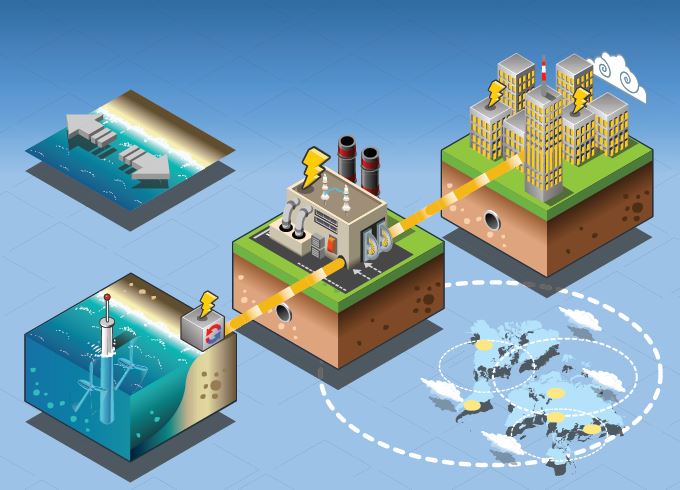 For years the concept of tidal energy struggled to get off the drawing board, but this has changed thanks to a series of successful demonstration projects and an influx of investment.

This article was originally published as part of the PEI print edition in Smart Energy International Issue 3-2020. Read the full PEI section here, the full combined digimag here or subscribe to receive a print copy here.

The question of how to get the most out of your assets is one that is high on the list of priorities for companies around the globe. In the renewable energy sector, this question is equally important to the companies monitoring and controlling renewable energy generation plants.

The last decade however has seen the technology come into its own, overcoming the challenges posed in years past, and opening the door to predictable, perpetual, efficient clean energy in an exciting new market.

2019 was the year in which wave energy finally showed its mettle. There have been numerous challenges to overcome ” the cost to benefit ratio being arguably chief among them.

The biggest detractors from the value side of the equation?

If you said efficiency, you’d be wrong. Wave energy boasts the highest efficiency rating of any renewable energy source. The problem has always been capacity. That has changed.

According to the International Energy Agency’s global marine energy technology initiative Ocean Energy Systems, the deployment of tidal and wave energy systems grew from just 5 GWh to over 45 GWh between 2009 and 2019.

With current technologies capable of producing as much as 1,400 TWh per year, almost 9% of the currently estimated 16,000 TWh of electricity consumed globally, wave energy could supply a substantial part of the electricity demand of several European countries. These include the UK, Denmark, Portugal, Spain and Ireland. Beyond Europe, the US and China have taken the most noteworthy steps in embracing the technology, which can bridge a considerable part of the massive gap in clean energy capacity still required to achieve the goals set out in the Paris Agreement.

What’s even more exciting, however, is that these technologies are just on the point of maturing, and 2019 saw a spike in investments to help the resource tap into its potential.

à¢€¢ A terminator, often a paddle-like device placed perpendicular to the main direction of the wave;

à¢€¢ an oscillating water column which generates electricity from the wave heave pressure effect in a shaft;

à¢€¢ a point-absorber which is a floating structure that absorbs energy from all directions through its movement at or near the water’s surface;

à¢€¢ an attenuator, like a terminator, but placed parallel to wave direction; and

à¢€¢ overtopping devices ” a floating reservoir that is partially submerged, using wave energy to create a head of water that is used to run hydro turbines.

2019 saw six projects installed in European waters, mainly in Portugal and the UK. After passing certification in March, Finnish-based AW-Energy deployed its commercially-ready WaveRoller device in November in a location 820 metres off the coast of the Portuguese city of Peniche.

The WaveRoller converts ocean wave energy to electricity in near-shore areas (approximately 0.3 ” 2 km from the shore) at depths of between 8 and 20 metres. Fixed to the seabed, the device remains mostly or fully submerged, and a single unit has a capacity of 350 kW and 1,000 kW, at a factor of 25-50% depending on wave conditions at the project site. The technology can be deployed as single units or in farms.

As the WaveRoller panel moves and absorbs the energy from ocean waves, hydraulic piston pumps attached to the panel pump hydraulic fluids inside a sealed hydraulic circuit.

“At this phase of the installation, we are collecting data 24/7 to monitor the performance of the device using motion, pressure and strain gauge sensors that are engineered into its panel, foundation and bearings,” said Christopher Ridgewell, CEO of AW-Energy Oy at the time. Extended sea trials are allowing for fine-tuning of the system’s controls to the WaveRoller’s control to maximise performance and yield.

In the UK, Wales specifically, Swansea-based Marine Power Systems (MPS) was awarded more than €13 million in EU funding to further their WaveSub wave generation technology. The technology was invented by two Swansea University graduates, Dr Gareth Stockman and Dr Graham Foster, which led to the founding of MPS in 2008.

Then in November a second device, this time a hybrid between offshore wind power and the company’s WaveSub device, saw the company awarded a further à‚£4.3 million for development, which has the potential to make generation in deep water locations more viable.

Globally, several advanced deployments and pilots are underway, with 3 MW of wave energy expected to be deployed in Europe, and a combined 1.2 GW in China, the US, and Canada expected.

The UK is set to lead in terms of new installed capacity, accompanied by Spain, with funding from the EU’s BlueGift and Ocean DEMO projects. Three new full-scale devices should hit European waters ” made by Bombora, with the fully-submerged mWave device, Wello and Wavepiston.

Outside of Europe, installations could add 1.2 MW of wave energy capacity to the global total. Several devices are expected to be deployed in China (GIEC), the USA (Columbia Power Technologies) and Australia (Wave Swell Energy).

That same month, Welsh company Bombora announced that its mWave technology was on track for trial deployment by mid-2020. The mWave features a series of air-inflated rubber membranes mounted to a concrete structure on the sea floor, positioned at an angle to the incoming waves. As waves pass over the mWave, air inside the membranes is squeezed into a duct and through a turbine-driven generator, before being recycled to re-inflate the membranes ready for the next wave.

Locating the device below the surface also overcomes the vast majority of survivability issues like extreme weather, which has dogged previous wave energy developers.

It will be the first time a full-scale 1.5 MW device has been deployed in the ocean.

Bombora is also seeking approval for a follow up 2 MW Lanzarote Project and hopes for completion in 2022.

According to Henry Jeffrey, the chairman of Ocean Energy Systems from the University of Edinburgh: “In the last 12 months we have seen major progress with global tidal projects achieving extensive operating hours and wave technology progressing in a large-scale laboratory and offshore test sites,” he said.

“A growing range of devices is now being tested in open water with an acceleration of cross-border R&D projects supported by the European Commission.

“Ocean Energy Systems has also been working closely with the US Department of Energy, Wave Energy Scotland and the European Commission to achieve an internationally accepted approach of performance metrics for ocean energy development. This will be of high value to technology developers, investors and funders. We expect to see many more advances that are positive in 2020, with large investments being made by governments around the world.”

Though wave energy is still not able to compete fully against more mature technologies such as wind, in the medium term it will contribute significantly to energy markets close to the sea. In the longer term, wave energy could become a much more important part of the world’s energy portfolio, and it seems that the sector is finally ready to take its place at the table.