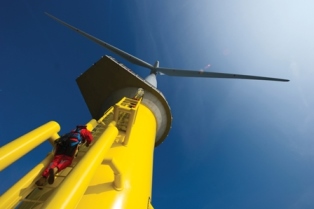 In a landmark deal worth à‚£459m ($725m), the owners of UK-based London Array ” the biggest offshore wind farm in the world ” have agreed to sell off its transmission assets.

It will buy all of the wind farm’s substations and cable assets in the biggest deal yet under the UK’s Offshore Transmission Owner (OFTO) regime. Half of the debt funding for the purchase was provided by the European Investment Bank.

Blue Transmission London Array is a consortium of Barclays Infrastructure Fundà‚ Management and and a UK subsidiary of Mitsubishi Corp.

He added: “This competitive approach is also benefitting energy consumers. Running this link will cost consumers a quarter less than previous projects.”

He said the financial support of the European Investment Bank was “a further endorsement of the competitive approach that is delivering offshore transmission investment”.

Jonathan Taylor, European Investment Bank vice-president for the UK, said:à‚ “Investment in transmission projects is essential to link sources of renewable energy to the national grid.”

He added that in the last five years the bank had provided more than à‚£6bn for long-term investment in the UK energy sector.

Located off the east coast of England, London Array is owned by Dong Energy, E.ON and Masdar and was opened this summer by British Prime Minister David Cameron. Its 175 Siemens 3.6 MW turbines have a combined capacity of 630 MW and are expected to produce enough electricity to power over half a million UK homes each year.