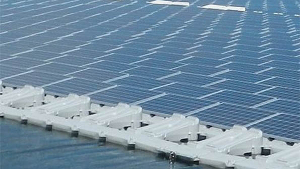 One of the world’s largest floating solar power plants, a 13.4 MW project, is to be developed at the Yamakura Dam reservoir in Japan’s Chiba prefecture.

The developer is Kyocera TCL Solar, a joint venture between Kyocera – which will build, operate and maintain the plant – and Century Tokyo Leasing, which will provide project financing.

French floating solar company Ciel et Terre is to provide the platforms (pictured) on which around 50,000 Kyocera solar photovoltaic (PV) modules will be installed across a water surface area of 180,000 metres. Kyocera says the project will be the world’s largest floating solar power plant once completed.

Scheduled to come online in early 2016, the plant is expected to generate around 15,600 MWh per year. Its power will be sold to Tokyo Electric Power Co (Tepco).

In addition to the power plant, the project partners plan to build an education centre next to the site.