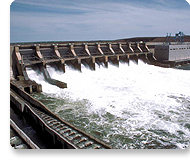 President of Argentina, Cristina Kirchner says that a $4bn hydroelectric power project will lead to greater economic development in the country.

A consortium led by China Gezhouba (Group) has been awarded the contract for the construction of the 1740 MW dam in Santa Cruz, ahead of 20 other contenders.


Chinese companies like Gezhouba and Sinohydro are now the biggest builders of dams around the world, according to International Rivers, an international non-governmental organisation, which also said that Chinese banks finance the projects.