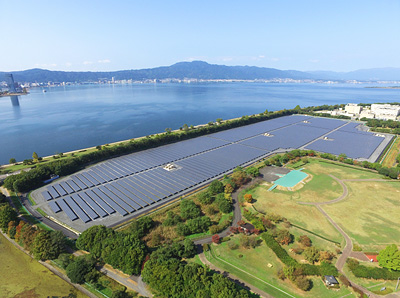 Work on the largest ‘mega-solar’ power project in Japan‘s Shiga Prefecture has been completed, its developers announced this week.

The 8.5 MW photovoltaic (PV) plant (pictured), which sits on a reclaimed island on Japan’s biggest lake, Lake Biwa, is composed of 33,000 solar modules. It is expected to generate 9.3 GWh per year.

Developer Kyocera TCL Solar, a joint venture between Kyocera and Century Tokyo Leasing Corporation, began construction on the project in 2014.

Kyocera and Century Tokyo Leasing said they are developing further mega-solar projects on repurposed or underutilized land at multiple sites in Japan, including a number of abandoned golf courses. Among the projects under construction are a 92 MW plant in Kagoshima, 23 MW plant in Kyoto, a 29.2 MW plant in Tottori and a 27 MW plant in Fukushima.

Mega-solar projects are a growing trend in Japan, with a number of projects announced this year.