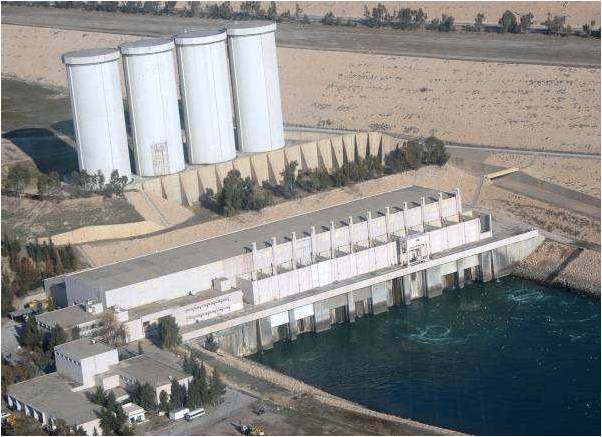 Iraqi militant group Isis has reportedly seized control of a hydroelectric dam 50 km from the city of Mosul.

The Mosul Dam (pictured) on the Tigris river is Iraq’s largest dam and the fourth largest in the Middle East. It features a 750 MW power station with four 187.5 Francis turbines, a 240 MW pumped-storage plant and a 62 MW run-of-river downstream dam, which together supply power to Mosul’s 1.7m residents.

In a report issued in 2007, the US Office of the Special Inspector General for Iraq Reconstruction warned that shoddy construction coupled with an unstable karst foundation had left the dam “in a potentially dangerous condition”, and that a $27m programme to reinforce its foundation had been mismanaged.

According to the report, if the dam were to fail, a 20-metre wave could cover Mosul and the surrounding area, potentially reaching Baghdad.

News outlets have speculated that Isis could use the dam to flood cities or cut off water to farms.

Meanwhile in another troubled Middle Eastern region, Egypt has stepped in to assist Gaza, whose sole power plant was destroyed by an Israeli bomb last Tuesday.

The Egyptians have increased the amount of electricity they are providing for the Palestinian state and urged Israel to enable the repair of nine power lines which distribute Israeli-generated power, that have left at least one million people without electricity.

An official told Reuters that Egypt has added an extra 7 MW to the 27 MW it feeds into Gaza, and plans to increase that by 15 MW more in an effort to alleviate the electricity crisis.