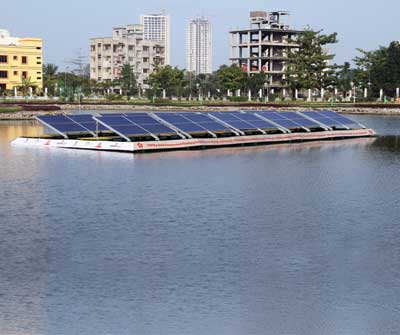 India’s huge solar ambitions have just grown a whole lot larger, but can the Modi administration turn its soaring goals into a grid-parity reality?
David Appleyard suggests that while the achievement is still a vision, investments are rapidly making it tangible

India‘s solar photovoltaic ambitions, as first broadly stated in the Jawaharlal Nehru National Solar Mission (JNNSM), have always been considered perhaps just a little bit too ambitious. Even when the programme was first introduced in 2010, hitting a proposed target of 20 GW installed by 2022 was deemed somewhat unlikely given the structural and economic challenges that India faces.

Four years later and there are those who point out that progress on the target to date has been patchy, though impressive in places. Certainly there are indications that the grandiose, centrally-administered scheme has failed to meet expectations. New forecasts from Mercom Capital, for example, put India’s cumulative solar installations at just above the 3 GW mark, with 734 MW newly installed in 2014. However, with earlier calendar year installations forecast at about 800 MW, the figure indicates a 20 per cent drop in installations year-on-year.

Furthermore, according to the Ministry of New and Renewable Energy (MNRE), the total grid-connected solar power installed capacity at the end of the financial year 2013″2014, which ended in March, stood at 2632 MW. Of this, only 26 per cent (688 MW) was added under the JNNSM, whereas about 50 per cent (1323 MW) was added under various state policy initiatives.

Despite this, Mercom is forecasting that 2015 installations will more than double, reaching approximately 1800 MW in the year as the market stabilizes following the election of Prime Minister Narendra Modi and in the wake of an August decision not to impose anti-dumping duties.

“The Indian solar industry is visibly upbeat since the elections, and especially after getting past the anti-dumping case,” explains Raj Prabhu, chief executive and co-founder of Mercom Capital Group. “Recent cancellations of coal mining licenses by the Supreme Court amid rising coal imports and increasing costs, and continuing power shortages have all contributed to the positive momentum in the solar sector,” he added.

The MNRE meanwhile cites the state of Gujarat as the pioneer, having commissioned 860.4 MW under state-backed incentives, close to a third of the nation’s total installed capacity. Madhya Pradesh and Maharasthra followed with 2013″2014 state-backed installations of 175 MW and 150 MW, respectively. Conversely, Rajasthan, which has the second highest total capacity, installed most of this under the JNNSM, with only 22 MW coming under the state solar policy support. According to MNRE, the state is also in the process of allotting 50 projects, each of 1 MW capacity.

Standing up for solar

While the growth of India’s solar sector may so far have depended more on state-wide à¢€” rather than national à¢€” initiatives, there is no shortage of positive reinforcement from central government.

In a bid to drive the JNNSM programme forward, in the last year MNRE released a new installation goal of 15 GW by 2019 that is to be established through three tranches of huge 500 MW to 1 GW utility-scale solar parks. Meanwhile, MNRE has recently revealed 12 locations in seven states where so-called ultra-mega solar projects could be set up. To be developed over the next five years in collaboration with state governments, the projects would have a combined capacity of some 20 GW. Andhra Pradesh alone has apparently identified sites that could support 2500 MW of these so-called mega PV installations, while the largest project will be developed in the state of Jammu and Kashmir with a capacity of 7.5 GW. Rajasthan will host three 1 GW projects while Madhya Pradesh and Punjab will each host two large projects with a total combined capacity of 3.5 GW.

However, undoubtedly the most striking development is a new 100 GW target for solar PV by 2022. According to comments attributed to India’s energy minister, Piyush Goyal, the JNNSM target is to be multiplied by a factor of five with the government working specifically towards achieving grid parity.

“On the solar front, we believe there is enormous potential to take it to 100,000 MW in the next five to seven years,” Goval told reporters recently, adding: “Renewable energy may seem expensive but, in the long run, it scores over conventional energy. The subsidy regime needs to be more robust, targeted and sustainable. India stands committed to lead the revolution in the renewable energy sector. Transparency, honesty and world-class technology will be the key to dealing with key challenges.”

And perhaps it’s no coincidence that the new government is fully embracing solar given that, in its election manifesto, the now-ruling government party known as BJP pledged to expand the JNNSM. And, perhaps more significantly, Modi was formerly chief minister for the singularly outperforming à¢€” in terms of solar installations à¢€” Gujarat.

If there is a question mark over the central government-backed mega solar project (500 MW+) strategy, it concerns the long-term sustainability of such a programme. Mercom Capital’s analysts argue that by exclusively developing large-scale and mega solar projects, India is going in the opposite direction from many other markets which have seen a shift to residential and commercial rooftop projects. Transmission and distribution losses are estimated at about 25 per cent in parts of India, and land availability and the generally poor grid infrastructure also present significant challenges, Mercom believes.

However, there’s no doubt that, right now, utility-scale solar development is rapidly growing in some markets, according to Wiki-Solar figures from October. Their analysis put India in fourth place globally, with 196 utility-scale plants installed with a combined capacity of 2203.2 MW and following only the top three countries on any solar ranking table: the US, China and Germany.

Whatever the concerns over the long-term viability of a mega solar project strategy, interest in India’s solar power sector has also been buoyed by a series of positive announcements over recent weeks.

For example, a new deal between the US ExIm bank and the Indian Renewable Energy Development Agency (IREDA) has opened the doors on a potential $1 billion in finance to facilitate solar technology exports. The signing of a memorandum of understanding with IREDA will support clean energy development, specifically “solar, wind, hydro and other renewable energy projects” which “have been identified as priority areas of clean energy investment cooperation under this MoU,” the document states.

Private capital is also apparently set to flood into India’s solar sector. For example, US investment bank Morgan Stanley is reportedly considering a play on a 100 MW+ project, joining the likes of Goldman Sachs and Standard Chartered in expressing interest in this market. Japan’s Softbank is also reportedly eyeing up a slice of India’s solar development field.

And India’s solar plans are going to need investment. Including transmission capacity, if the nation is to reach its solar goals it will require investment to the tune of $110 billion.

Inevitably, there are plenty of investment targets for those looking to enter Indian solar territory. India’s largest power player, the National Thermal Power Corp (NTPC), already has a solar project pipeline of some 4 GW and recently inked another deal to develop a 375 MW solar project in Uttar Pradesh as part of a strategy to expand its solar portfolio. State-owned Coal India has also signed an agreement with Solar Energy Corporation of India (SECI) to develop 1 GW of solar power projects across the country.

There are also efforts to address some of the key structural issues that have presented barriers to inward investment.

Recently, 3TIER India revealed that it is to create a Solar Atlas of India together with C-WET, a research and development institution that forms part of MNRE. The Atlas forms “part of a wider strategy to ensure adequate solar radiation data is available to the domestic and international business community, with a particular emphasis on those that have already identified the Indian market to be of strong investment interest”.

“This involves appropriately sizing the system to match the available energy resource, evaluating proximity to transmission and major centres for energy demand, as well as ensuring that the infrastructure is equipped to manage the influx of energy from a variable source.”

Alongside policy initiatives, improved financial prospects and growing experience and knowledge, there is evidence of a buildup in the supply chain too.

For instance, Vikram Solar has announced that it is looking to expand its upstream footprint by getting into cell production, as well as manufacturing modules and providing EPC solutions.

Besides plans to expand module production capacity to 350 MW by the second half of 2015 and 600 MW by the end of the year, the firm is currently evaluating several options, including joint venture agreements to set up a 250 MW cell manufacturing plant in early 2016 in order “to cater to the ever-increasing demand for cells made in India”.

Spelling out the challenges of the new 100 GW target, Tobias Engelmeier, director and founder of Bridge to India, said in a statement: “A ramp-up from the current 3000 MW to 100,000 MW sounds very ambitious from various perspectives. It means: an annual growth of 55 per cent over eight years, $100 billion in investments, five lakh (500,000) acres of land (around 200,000 ha), massive new infrastructure and convincing of often bankrupt state discoms (distribution companies) to buy all this solar power.”

Nonetheless, Mercom’s Prabhu presents a more positive perspective. He observes: “Since the inception of JNNSM in 2010, there has never been a shortage of big goals and announcements. Two primary challenges have been execution and uncertainty, due to the lack of long-term market visibility.

“A renewed government focus to address these challenges would give confidence to the markets, and help attract sorely needed foreign investments,” he concludes. And indeed this seems to be happening, as evidenced by US President Barack Obama’s January statement that the US “will stand ready to speed [India’s solar] advancement with additional financing”.

“That said,” Prabhu continues, “prospects for the Indian solar sector have never looked better and the Modi administration’s strong commitment towards solar has percolated to states, evidenced by the sense of urgency and seriousness being shown by state administrations towards solar, the likes of which we have not seen in the last five years.”

David Appleyard is a freelance journalist focusing on the energy sector