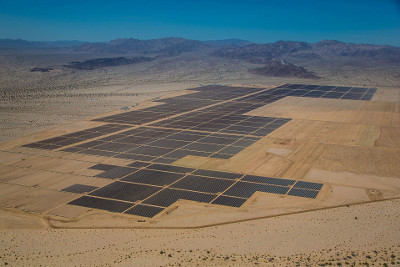 A 750 MW solar photovoltaic (PV) power plant ” the world’s largest ” is set for development in the Indian state of Madhya Pradesh.

Scheduled for completion in August 2016, the plant will push the US’s 550 MW Desert Sunlight solar power project (pictured), commissioned this week in California, off the top of the global list.

Tenders for the project in Madhya Pradesh’s Rewa district are expected to be invited by the government in April and the acquisition of 1500 ha of land is close to being finalized, according to reports. In addition, work has begun on new power transmission lines.

The project will be a joint venture between the state government and the federal government-owned Solar Energy Corporation of India (SECI). à‚

According to a government official in the Ministry of New and Renewable Energy, the plant is to be developed in three 250-MW stages.