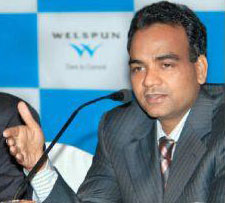 The Welspun Group has announced that it is to invest over $2.5bn in increasing its solar power capacity in India.

Welspun Group chairman B.K. Goenka told Press Trust India: “We are planning to invest up to Rs 15,000 crore over the next three years in the renewable energy space to take our total generation to 1.75 GW. While we already have a commissioned capacity of 328 MW, mostly in the solar space, we have close to 725 MW under development.”
Goenka cited the surety of returns as making energy investment attractive and also pointed to the constant demand for energy in power-starved India as a motivational factor.

Welspun, which is also the world’s second largest home linen maker and one of the top heavy industrial pipes producers, has two subsidiaries in the energy space – Welspun Renewables Energy and Welspun Energy – one for the solar and the wind respectively.

Goenka added that his company has the capabilities to do the design, engineering and construction of renewable projects, which brings down his execution cost.

Most of this fresh investment will be in solar space, focusing on the Andhra Pradesh, Maharashtra, Punjab and Rajasthan regions.