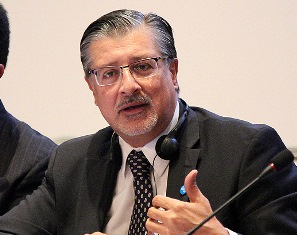 India’s surging energy demand can “no longer be met through traditional energy sources alone”, according to a leading renewables boss.

Speaking in New Delhi yesterday, Adnan Z. Amin (pictured), director-general of the International Renewable Energy Agency (IRENA), said: “Renewable energy must be a major part of the solution because it can meet the demand cheaply and sustainably while at the same time achieving broader socio-economic objectives.”

He told delegates at renewable financing conference RE-Invest that the cost of generating power from renewable sources has reached parity or dropped below the cost of fossil fuels for many technologies in various parts of the world.

He said that according to an IRENA report Renewable Power Generation Costs in 2014, biomass, hydropower, geothermal, wind and solar are all competitive with – or cheaper than – coal, oil and gas-fired plants. “This holds true even without financial support and despite falling oil prices. Solar photovoltaic is leading the cost decline, with solar PV module costs falling more than 75 per cent since the end of 2009 and the cost of electricity from utility-scale solar PV falling 50 per cent since 2010.”

Amid added: “Falling prices are driving renewable energy investment in India, which rose 13 per cent last year and is expected to surpass 10 billion dollars in 2015. Adoption of increasingly cost-effective renewables holds the genuine promise of a new age of socio-economic development, powered by clean, increasingly decentralised, and sustainable energy. The opportunity for India is tremendous.

“India has one of the most ambitious renewable energy programmes in the world and developments in India will strongly influence the trajectory of the energy transformation worldwide. The signs of progress so far are encouraging, and the attendance here today is testament to the recognition that renewables are a fantastic investment opportunity.”