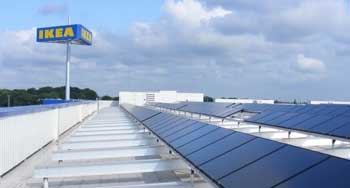 An Ikea store in Italy has installed one of the nation’s first unsubsidised on-site solar power plants.

The project features 2700 PV modules installed on fixed structures. It will produce power for the store and is expected to avoid 373 tonnes of CO2 emissions per year.

The project was structured without a feed-in tariff approach, Martifer Solar said, adding that the power generated by the installation will be at a levelised cost of energy (LCOE).

‘This achievement means that solar energy is as cost-competitive as any other energy source in Italy, and principally without subsidies,’ said Henrique Rodrigues, Martifer Solar’s CEO.

Valerio Senatore, general manager of Martifer Solar in Italy, said, ‘This is a solid proof that grid parity in Italy is now a reality and we are proud to move toward this new market concept.’