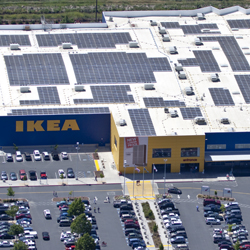 Furniture giant IKEA has purchased another wind farm from Irish renewable energy development company, Mainstream, the second such facility by the Swedish company in three months.

Mainstream is currently building the 20 turbine, 46 MW wind farm in Alberta, Canada at a cost of CAD$90m.

“There are a number of companies who are active and taking a similar approach such as Google, Microsoft and Walmart through either equity investments or direct purchase of electricity from a renewable energy project. We see it as a significant growth area in the sector as more and more blue chip companies see the economic benefit of securing electricity supply that is a fixed cost 20 years and beyond.”

Speaking at the announcement, Ken Hughes, Minister of Energy, Alberta said, “IKEA Canada is demonstrating a long-term commitment to both the province and our energy footprint with the development of this important project.”