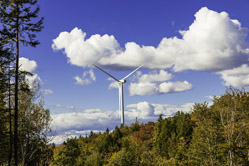 A report by the International Energy Agency (IEA) predicts that wind power could account for 18 per cent of the planet’s electricity by 2050 if barriers to deployment can be removed.

The IEA Wind Power Technology Roadmap 2013 Edition recognises the very significant progress made since the first edition was published in 2009.

The report outlines how technology continues to improve rapidly, and costs of generation from land-based wind installations continue to fall. Wind power is now being deployed in countries with good resources without any dedicated financial incentives.

However, the report adds that increasing levels of low-cost wind still require predictable, supportive regulatory environments and appropriate market designs and the challenges of integrating higher levels of variable wind power into the grid need to be addressed.

Meanwhile the IEA study says for offshore wind, much remains to be done to develop appropriate large-scale systems and to reduce costs.

The 2013 Wind Power Roadmap also provides updated analysis on the barriers that exist for the technology and suggests ways to address them, including legal and regulatory recommendations.