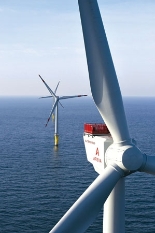 Areva is to supply Iberdrola with 70 of its 5 MW wind turbines for the Wikinger offshore wind project in the Baltic Sea.

The $738m project will be Iberdrola‘s first offshore wind farm in Germany and its second such facility after this year’s commissioning of West of Duddon Sands in the Irish Sea.

Manufacturing will take place at Areva’s production sites of Bremerhaven and Stade, in the north of Germany, and the turbines are scheduled to be installed as early as 2017 on jacket foundations from the port of Sassnitz.

The Wikinger site covers an area of roughly 34 km2 with water depth ranging between 37 and 43 metres. Once in operation, Iberdrola’s new offshore wind farm, with total investment amounting to €1.4bn, will produce electricity for around 350,000 German households while creating around 100 direct and indirect jobs.