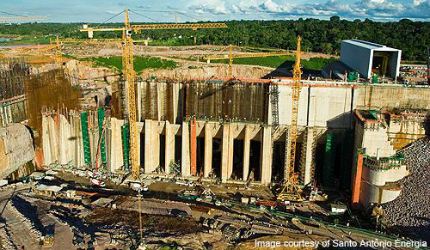 Brazilian company Santo Antonio Energia, which operates the Santo Antonio hydropower plant in the state of Rondonia, is negotiating with the country’s government for an increase of 150 MW in the plant’s power production for 2015.

The run-of-river plant (pictured) features 50 turbines and all them will need to work at full capacity to reach this goal. At present there are only 32 turbines working at fulll capacity. All turbines are expected to be fully operational by November 2016.

The San Antonio hydropower project began commercial operation in 2012, achieving production of 2300 MW in 2014. It is expected to have an installed capacity of 3580 MW on completion in 2016.

An increase in the plant’s production will address Brazil’s power supply problems in the midst of a drought.