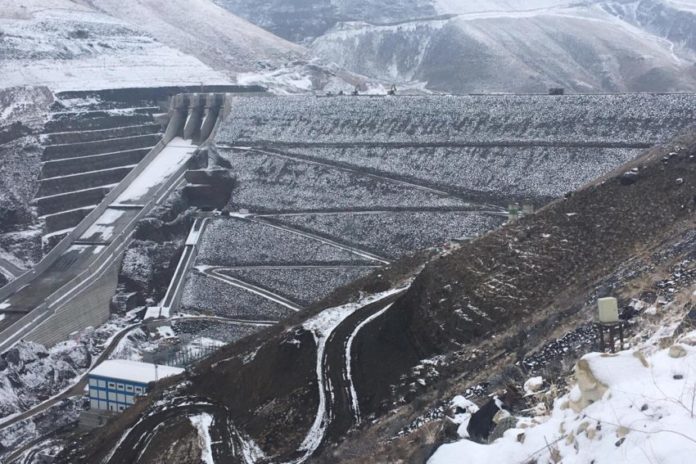 European hydropower company ENERGO-PRO has completed the Karakurt Dam in Turkey, including the construction of part of the power plant and has started filling the reservoir.

The dam for theà‚ 99.5-MW Karakurt hydro plantà‚ on the Aras River in eastern Turkey is ranked among the highest asphalt-core dams in the world, ENERGO-PRO says.

The dam is 137 meters high and construction started in 2017. To build the dam, 6.4 million cubic meters of rock was needed, and 30,500 cubic meters of asphalt mixture were consumed on the asphalt core itself.

“This technology is still very rarely used in Turkey, as the laying of asphalt requires considerable precision both in the design of the mix and in the construction itself. In this respect, the investor plays an important role and must have the whole process closely monitored,” said Celal Kozumali, director of ENERGO-PRO Turkey.

“Karakurt will be one of our three largest power plants. It is also an important reference for us, we were able to complete the construction according to the timetable and with significant financial savings compared to the original prognosis,” said Pavel Vàƒ¡à…Ë†a, chief executive officer of the Prague-based ENERGO-PRO Group.

Construction of the power plant started in 2018. The plant will be connected by two electric lines. The first is 7 km long, the second 40 km. Up to 1200 workers were working on site during peak times of the dam and power plant construction, and the work was carried out in shifts 24 hours, seven days a week.

ENERGO-PRO says about 1000 people had to be evicted due to the construction of the dam and power plant. The company’s purchase of land and resettlement costs amounted to nearly $21m.

The total estimated costs of the project are now around $220m.

Turkey considers the construction of new water resources to be one of the main ways to get rid of its dependence on energy imports. The Turkish government expects that energy demand will increase due to long-term economic development and despite the country’s economic problems in recent years.

A study by the University of Economics in Izmir has shown that hydroelectric power plants are the most suitable energy source for Turkey. Their share in the total installed capacity of Turkish power plants is already over 30 per cent.