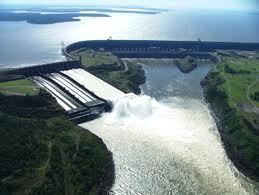 Brazil’s Electricity Regulatory Agency (Aneel) has announced that the nation’s government and the governments of several states received about $500m during the first half of 2014 in compensation for the use of hydropower resources.

Approximately $400m was paid in compensation for the use of hydropower resources while the remaining was in the form of royalties paid by the bi-national Itaipu station (pictured), jointly operated by Brazil and Paraguay.

Brazilian states and municipalities receive 45 per cent of the collections.