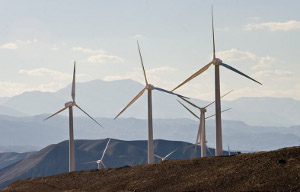 The wind industry is reportedly eyeing power project development in Iran as the anticipated end of sanctions in early 2016 opens new potential opportunities.

Berlin-based wind project developer Umweltconsult and turbine manufacturer Nordex are two of a number of wind sector players reportedly preparing to enter the Iranian market. Umweltconsult has said it is planning to put 47.3 MW in Iran as early as 2016, while a spokesman for Danish OEM Vestas told the Bloomberg news service that the company is “eager to explore” opportunities in Iran. Indian OEM Suzlon has also expressed interest, with its chairman visiting recently.

Iran has had a renewable energy target of 5 GW by 2020 in place since 2012, with 150 MW currently installed. The country offers a feed-in tariff (FiT) for wind of 5300 rials ($0.18)/kWh, plus an additional payment of around $0.02/kWh to counteract inflation. It also offers higher rates for power generated during peak times, funded since 2014 by a surcharge on consumer electricity bills.

The nation’s wind potential has been estimated at over 30 GW. Around 2.5 GW of wind capacity was installed at the end of 2014, according to government figures – significant growth compared to the 120 MW on the ground in 2012.