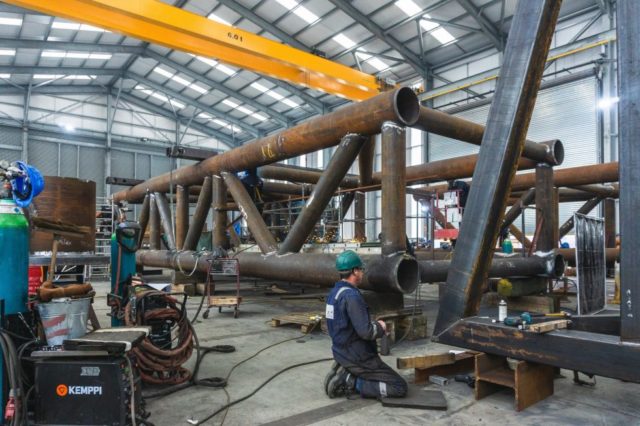 Bombora has now contracted more than 70 per cent of its groundbreaking £17m Pembrokeshire Demonstration Project in Wales.

The project is currently on schedule for deployment in mid-2020 and forms part of Bombora’s accelerated commercialization plan to validate mWave’s performance capabilities with a bigger scheme in Lanzarote, Spain already on the horizon.

mWave, an idea originally conceived by two engineer brothers in Western Australia, presents a new approach to capturing energy from the ocean.

mWave’s design and modular construction allow it to reduce the cost of wave energy, meaning it can quickly become competitive as production scales up.

Bombora’s mWave Demonstrator is on schedule to commence the testing phase this year, having received full test site consents in the autumn of 2019. It will be the first time a full-scale 1.5 MW device has been deployed in the ocean.

Bombora’s mWave project is part-funded with £10.3m from the European Regional Development Fund through the Welsh Government.

Bombora’s follow up 2 MW Lanzarote Project is currently progressing through the consenting phase and will be commissioned in 2022.

Chris Williams, commercial manager at Bombora, said: “mWave has the potential to transform the marine energy sector and it is very exciting to see fabrication nearing completion. We are delighted to be able to bring this project to fruition in Pembrokeshire, with over £6m committed to local suppliers to date”.

“It has been less than two years since the project was approved by the Welsh European Funding Office, and it has been a fantastic team effort to minimize the time it takes to design and build a full-scale wave energy converter, as well as develop a fully consented test site.”

“As well as testing the nearshore mWave in 2020, we are also excited to be expanding the mWave product range to include floating offshore wave and floating hybrid wind+wave options”.

Wales is well-positioned to be a major beneficiary of this expanding market. Bombora plans to export its technical know-how and expertise from its Pembrokeshire base utilizing the experienced supply chain that is being developed during the Pembrokeshire project.