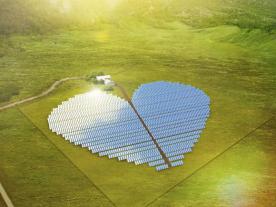 The world’s first heart-shaped solar power plant is to be built on a Pacific island, its developer has announced.

German solar company Conergy is to build the 2 MW photovoltaic plant (pictured, artist’s rendition) on the largest island of the French overseas territory of New Caledonia, located in the southwest Pacific Ocean around 1200 km east of Australia. Construction is scheduled to begin in the next several months and the plant, named the ‘Heart of New Caledonia’, is planned to come online in the first quarter of 2015.

The plant’s 7888 solar panels are expected to generate enough electricity to power 750 homes, saving two million tonnes of CO2 over its 25-year lifetime.

Its design was inspired by the island’s ‘Coeur de Voh’ (‘Heart of Voh’, pictured), a natural wild mangrove formation (Voh is the region where the plant will be located). The design will only be visible from the air.