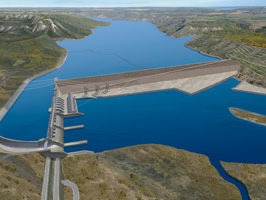 The 165 MW Amaila Falls hydroelectric power project in Guyana is under threat after a major power developer decided to pull out.

US-based Sithe Global made the decision to withdraw from the $858m project after the national parliament failed to secure unanimous support for new legislation.

The company claimed that political inconsistencies in the country have cost them funds from Inter-American Development Bank (IADB).

IADB has proposed to provide $100m funds upon condition of unanimous parliamentary support for legislation aimed at environmental security for the area around the site, besides raising government loan guarantees to state-owned companies.

Sithe issued a statement through a Guyanese newspaper saying: “The project cannot move forward, despite 16 years of work and over $16m of independent Sithe Global expenditures and more than $15 million of government expenditures.”