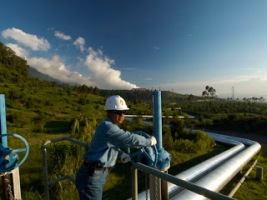 Worldwide geothermal power generating capacity will hit 12 GW by the end of the year, almost doubling its global footprint since 1996, according to a report by the Geothermal Energy Association.

According to the new report, construction on geothermal plants in Indonesia and the US will be among those adding substantial supplies of the renewable resource to the grid in the coming years.

Plants under construction and scheduled to be completed by 2017 will boost worldwide geothermal energy production capacity 14 per cent, to almost 14 GW.

Currently the US is the largest producer of geothermal power, with 3.3 GW in operation.

However, planned projects in Indonesia may push this Southeast Asian nation’s total installed geothermal capacity ahead of the US.

The report says, “Many US projects have progressed rather slowly due to an uncertain policy environment and problems attaining finance.”

And concludes: “There could be a time in the foreseeable future when Indonesia leads in global installed geothermal capacity.”.