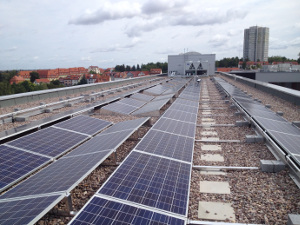 Thuringia State Office of Criminal Investigations (LKA) in Erfurt, Germany, is now being powered with solar cells after a 140 kW photovoltaic à‚ (PV) facility was installed on a number of building roofs (pictured).

The energy cooperative Erste Erfurter Energiegenossenschaft e. G. has leased out the police department’s roofs for 20 years for its largest system to date, which is expected to generate around 130 MWh annually.

The system is grid-connected though a potential direct supply of the police department LKA with solar energy is being discussed between the federal state and the energy cooperative.

‘We would like to generate as much clean energy as possible both in and with our properties,’ said Ingle Klaan, Thuringia Secretary of State for Building, Regional Development and Transport.