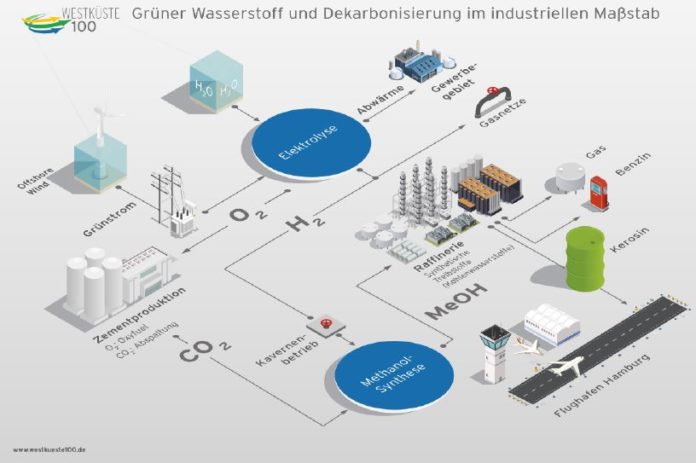 A consortium has won the go-ahead and funding approval from Germany’s Federal government for a landmark hydrogen project.

The WESTKàƒÅ“STE100 project is intended to produce green hydrogen, transport it in the German gas network, use it in industrial processes and then interlink different material cycles within the existing infrastructure.

As a result, the real-world laboratory project has taken a significant step forward towards its goal of progressively establishing a regional hydrogen economy on an industrial scale.

The funding approval enables work to begin on the first phase of the project, which is set to run for five years. This phase will result in a 30 MW electrolyser which will produce green hydrogen from offshore wind energy and provide information on the operation, maintenance, control and grid compatibility of the equipment.

In the future manufacture of fuel, hydrogen from electrolysis and unavoidable CO2 from a regional cement plant in Schleswig-Holstein will be used in the process. Preparations will be made for converting the Làƒ¤gerdorf cement plant to a more environmentally friendly (oxyfuel) combustion process.

What is special and innovative about the WESTKàƒÅ“STE100 project is the linking of different sectors within an existing regional infrastructure. This also includes the integration of green hydrogen in the existing process at Raffinerie Heide in a move intended to replace the use of grey hydrogen.

In addition, part of the generated hydrogen will be transported via a newly built hydrogen pipeline to Heide’s municipal utility for transfer to the natural gas grid.

Ultimately, there are plans to supply a hydrogen filling station, as well as build a 700 MW electrolysis plant, with the future prospect of making use of the waste heat and oxygen arising during the electrolysis process. Further plans also include the production of climate-friendly aviation fuels and large-scale supply to gas grids.

According to managing director of Raffinerie Heide, Jàƒ¼rgen Wollschlàƒ¤ger, “green hydrogen has become the key element in Germany’s energy transition”.

“For us at Raffinerie Heide, the funding approval fires the gun to go all out in creating a new, green business model around the manufacture and exploitation of green hydrogen for the future. In building and commissioning an industrial-scale electrolysis plant on our site we will become an active part of the industry of tomorrow.”