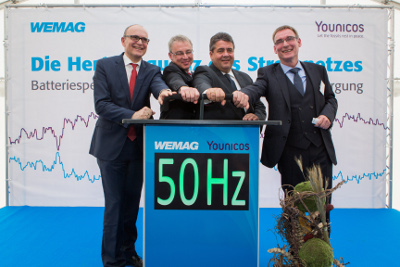 The €6m ($7.7m) plant, in the northern town of Schwerin, holds 25,600 lithium-ion batteries and has a storage capacity of 5 MWh. It is located next to a 110 kV substation operated by regional utility Wemag AG.

The plant was formally opened by German economy minister Sigmar Gabriel (pictured, third from left), who was quoted as saying “This is an interesting alternative to conventional power plants and the regional utilities have come up with an interesting project here”.

Grid-scale storage firm Younicos built the installation for Wemag, which it says plans to recoup its investment by marketing the battery’s power on the primary power market. à‚

Renewable power, especially wind, is increasingly coming online in northeastern Germany, leading to a need for grid stabilization solutions. The region’s 380 kV high-voltage transmission grid, which covers 8600 square km, received 80 per cent of its energy from wind power in 2013, and is expected to get 100 per cent from wind in 2014.

Younicos says its frequency control and grid communication software allows the battery park to stabilize grid fluctuations in under 10 milliseconds, well below the 30 seconds required by energy reserve market rules.

According to Younicos, the plant represents several ‘firsts’ for Europe: the first time a battery will offer primary frequency regulation without backup from a conventional power plant, and the first commercial operation of a battery park.