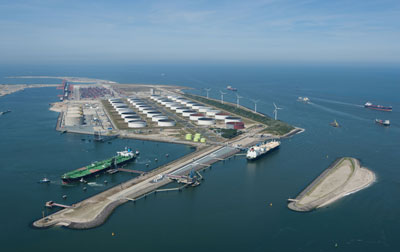 Europe’s largest port is teaming up with GE in a bid to look at a new way of powering is operations as the city pursues plans to cut its carbon dioxide emissions in half by 2025.

IEE Spectrum reports that even though Rotterdam in the Netherlands relies heavily on the fossil fuel industry, it is increasingly focused on how to leverage renewables and existing assets to power its own port.

Rotterdam and GE are coming together to develop a smart grid that can act as a virtual power plant (VPP), which would integrate thermal and renewable power production with flexible users in a centrally controlled system that would act as a single power plant. The city has been working with GE in the past few years to reduce emissions, improve water management and increase energy efficiency.

The port already has several cases whereby large industrial plants in the port produce their own electricity and heat, many using combined heat and power. The virtual power plant project would aim to be a sophisticated microgrid cluster, in which digital measurement and monitoring equipment on distributed resources can respond to the needs of the grid in real time.

“Rotterdam is certainly one of those global conglomerates of industry in a very tight space and, because of the petrochemical and other activity there, with incredibly high energy demands,” GE’s Stephen Burdis told PortStrategy. “That is one of the drivers behind the project.”

The virtual power plant project is part of a larger energy restructuring in Rotterdam. E.ON and GDF Suez are constructing coal/biomass power stations that will decrease the carbon footprint compared to a coal-only power plant. Some refineries in the port are already capturing carbon dioxide and providing it to greenhouse growers. Steam waste heat is being captured for district heating and the port has plans to double its capacity for wind energy.