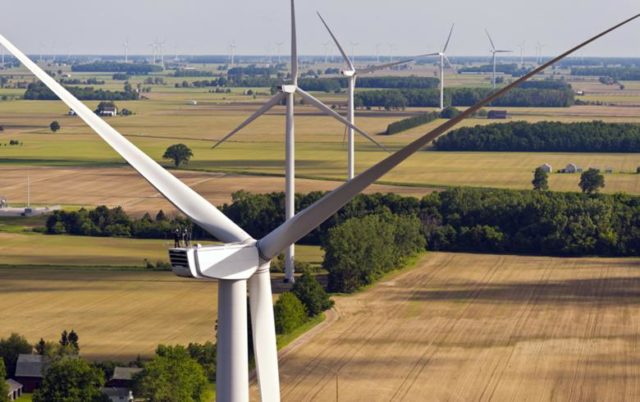 Uruguay has renewed its efforts to invest in wind power in recent years, with an installed capacity in the national system that reaches 500 MW. Only last January the South American country witnessed the installation of the Juan Pablo Terra wind farm with a capacity of 67.2 MW.

Investment in the sector has been defined in newspaper articles as “feverish” as a result of the installation of wind turbines in the eastern region. Up to January of this year, the wind system had grown 64 per cent compared to the same month a year earlier. Imports of wind turbines during January totaled $157m,  representing 17 per cent of imports.

Purchases of wind turbine components reached $89m, while in the same month last year these purchases were virtually nonexistent. These assets represent 9 per cent of the total. According to official figures, wind power accounts for 26 per cent of imports to Uruguay.

The estimated total investment in wind has reached beyond the $2bn, and it is estimated that no less than 25 per cent of that investment is in Uruguay – through logistics, transportation, installation and construction, among other activities.

In 2015 and 2016 it is estimated that 700 MW will enter the system, a figure that would help meet the national goal of having  about 1400 MW operational by 2016. However, this growth is not arbitrary, as in 2008 the government set a goal of reaching 50 per cent of renewables in the energy mix.

The growth of investment in wind power is such that, for next year, Uruguay is the country with the highest percentage of this type of energy in relative terms, with 30 per cent of installed capacity – a figure that is higher than Denmark, Spain and Germany. Late last year, the National Energy of the South American country said that about one quarter of the electricity consumed in the naton came from wind.

Ramon Mendez, area director, was quoted as saying that “in the next few years the energy matrix will be transformed so Uruguay will continue to export energy and will move to do so with natural gas.”

Uruguay’s energy system has historically had an interest mainly in oil and its derivatives, between 50 and 60 per cent of the total, a figure that has grown in recent years with the increase in renewable energy generation, especially wind. This change coincided with a decade of economic growth and its corresponding demand for energy, both at the household level and in the productive sector. From 2014 to today, energy demand grew at an average annual rate of over 6 per cent, and similar numbers are expected for the coming years.

A project that exemplifies Uruguay’s investment in wind energy is the Peralta I and II wind farm, which is being constructed by Agua Leguas. Fifty Enercon E-92 wind turbines will be installed at the wind farm, for a total capacity of 100 MW.

In the same project wind turbine towers, made of concrete, are being built with a production system employing around 150 workers, which will save the hassle and costs of transporting steel towers. The German firm supplying the machines made it to the port of Montevideo using a wind-powered ship, the first of its kind to reach South America’s waters.

It seems that wind power is booming in Uruguay and there are no signs that will lose steam.