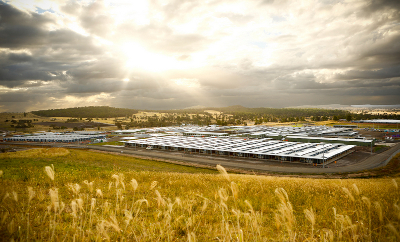 Global construction firm Laing O’Rourke will be constructing, setting up and packing down a fully redeployable large-scale solar-diesel hybrid power plant as announced by ARENA CEO Ivor Frischknecht who said the technology has the “potential to bring more renewable energy to off-grid Australia.”

The first deployment will be a 1 MW plant with 134 KWp of solar photovoltaics at Laing O’Rourke’s 350-bed Combabula accommodation village in regional Queensland, which will house workers during the construction phase of a major resource project.

Mr Frischknecht said the permanent nature of fixed framed solar installations is currently a substantial barrier to their use off-grid, particularly in mining operations and other short-term and medium-term ventures.

“The plant will consist of transport-friendly container-sized modules, including a control centre and inverters with external, pre-wired connections to allow fast, easy setup and pack down,” Mr Frischknecht said.

“A semi-portable hybrid system like this carries enormous potential ” it may provide industries and communities in regional and remote locations with a viable renewable energy alternative and could equally be used to assist in international relief efforts.”

Laing O’Rourke Managing Director Cathal O’Rourke said “Construction and engineering must break away from traditional processes if it is to evolve and deliver projects quickly, safely and more sustainably,” Mr O’Rourke said. “Our engineering and construction operations across Australia currently deploy hundreds of diesel generators, of which many can potentially be augmented with this new renewable energy technology.

“As specialists in major remote and regional projects, we have an opportunity to harness vast amounts of solar energy at our projects, for a sustainable engineering solution.”

Redavia Rental Solar Power, a Munich-basedà‚  provider of rental solar power for hybrid operation with diesel generators, was the first firm to deployà‚ redeployable large-scale solar-diesel hybrid power plants. It shipped its first rental solar farm product to a diesel-generator -powered gold mine in Tanzania, and has been in operation since June.