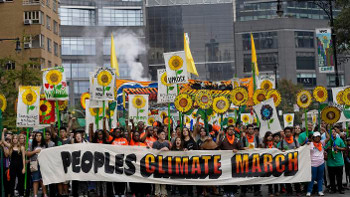 A coalition of philanthropic organizations is to announce today that its members have pledged to divest $50bn from fossil fuel-based projects.

The Global Divest-Invest coalition said it will reveal new pledges and members at a press conference in New York this afternoon, the day before the start of the United Nations climate summit. The announcement comes as marches to draw attention to the perils of climate change take place in the world’s major cities.

Among the charitable organizations and high-wealth individuals to be named is the $860m Rockefeller Brothers Fund, which is run by the family of Standard Oil founder John D Rockefeller. The coalition says its membership includes 650 individuals and 180 institutions including NGOs, charities, universities, churches and health organizations, which together have pledged to divest from fossil fuels over a five-year period and invest in renewable energy instead.

Some sectors, such as pension funds, have proved more cautious. Denmark’s PensionDanmark said in a statement that “Divestment will itself not contribute to solving the challenges of global climate change, and we believe it is not a very wise way to try and solve the issue”. Instead, CEO Torbenà‚ Màƒ¶ger Pedersen, in New York for the summit, has called on governments to establish more secure policies that will enable pension funds to invest in renewable power projects with an acceptable level of risk.

Also scheduled for today’s press conference is a video announcement from Archbishop Desmond Tutu in South Africa, who is expected to call for a global freeze on fossil fuel exploration. à‚