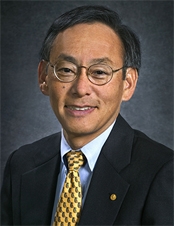 The ex-head of the Obama administration’s energy department believes energy storage will remain too expensive to meet long term urban power storage needs, and believes chemical alternatives will need to be found.

Professor Steven Chu is reported in the Australian as saying that the huge lithium-ion battery built in South Australia by Tesla boss Elon Musk had cost about 40 times as much as an equivalent power plant using an existing hydro-electric dam. He said while the costs of building battery plants were likely to halve over the next decade, the approach would never be cheap enough to accommodate the big seasonal shifts in renewable power production.

He said batteries could prove viable for storing power produced during the day for use during night hours, and “maybe” up to a week later, but not over seasonal timeà‚­frames.

“You need other new technologies to convert cheap reà‚­newà‚­able energy into chemical fuel when the sun is shining or the wind is blowing,” he told The Australian. “If you make really cheap hydrogen from renewables and store it underground, then you have something very different.”

While Chu’s current research encompasses batteries, he said fuel cells held more promise for urban power storage à¢€” particularly those based on liquid hydrocarbon. “We don’t have that technically economical today, but that is also part of my à‚­research.”

While power economics would be affected by variables such as carbon pricing and the need to stabilise electrical grids, manufacturing costs for utility-scale storage would need to be below $US100 ($123) a kilowatt hour.

“We won’t get there (through batteries), but one is hoping to get well below that through some innovative electrochemistry.”

Professor Chu is more positive on the clean energy potential associated with electric vehicles, saying it would be two to three decades before half of the vehicles on the road were electric, and by then electricity generation would be far cleaner.

Jeroen Buunk,à‚ energy consultant at Blueterra, which operates the Fuel Cell Energy Network,à‚ told Power Engineering International that fuel cells were capable of solving issues, beyond the capability of batteries.

“Fuel cells would be perfect to that. I would add to Professor Chu’s comments that in the long term hydrogen fuel cells have a lot of potential. Excess electricity could be used to produce hydrogen via electrolysis and in times of electricity shortage used as fuel for fuel cells.”