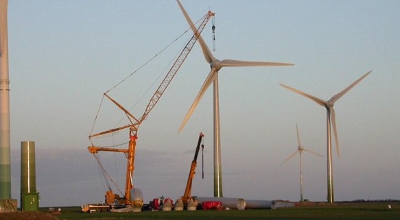 A report by the European Wind Energy Association (EWEA) has found that new wind energy capacity decreased by 8 per cent in 2013 compared to the previous year.

There are now 116,774 MW installed the EU, meeting 8% of EU electricity demand, and a further 4,188 MW in the rest of Europe.
The findings also outline that much of the new build (45 per cent) were focused in Germany and the UK with what it described as ‘previously healthy markets’ such as Spain, Italy and France stalling significantly compared to 2012, by 84%, 65% and 24% respectively.

“EU wind power installations for 2013 show the negative impact of the market, regulatory and political uncertainty that has been sweeping across Europe. Destabilised legislative frameworks for wind energy have undermined investments, and put green growth, jobs and energy security at risk” said Justin Wilkes, Deputy CEO of the European Wind Energy Association (EWEA).

“It is fundamental that the Heads of State at the March Council reaffirm the EU’s commitment to renewables and sets Member States binding and ambitious 2030 targets. The Commission’s weak proposal on a 2030 climate and energy framework will not bring stable growth back to the wind energy sector” he concluded.