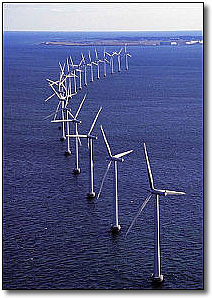 Offshore wind installations in Europe fell by 5.3 per cent in 2014, according to a new report.

Data gathered by the European Wind Energy Association (EWEA) showed a decrease of 84 MW in installations last year, with 408 new offshore wind turbines fully grid-connected for a total capacity addition of 1483 MW. According to the report, 343 additional turbines are awaiting grid connection.

EWEA said the drop represented a stabilization after record installations in 2013. Justin Wilkes, the trade body’s deputy CEO, commented: “It is not surprising that we see a levelling-off of installations in 2014 following a record year in 2013”, which included the commissioning of the 630 MW London Array.

“The industry has seen exponential growth in the early part of this decade and this is a natural stabilizing of that progress,” he added.

Europe’s offshore wind capacity currently stands at 8045 MW, encompassing 74 offshore wind farms in 11 countries. The UK, which leads the world in offshore wind, accounted for over half (54.8 per cent) of 2014’s new installations, followed by Germany (35.7 per cent) and Belgium (9.5 per cent).

However, Germany is expected to pull ahead in 2015, EWEA said, and is “set to buck the trend this year” according to Wilkes. “The UK has more installed offshore capacity than the rest of the world combined but this year shows that other countries in the EU are making serious investments in the sector,” he said.

According to the report, 12 offshore projects currently under construction will increase installed capacity by a further 2.9 GW, bringing Europe’s cumulative capacity to 10.9 GW by 2016.