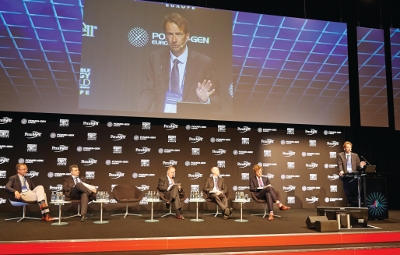 There is no going back from the energy transition in Europe and it will fundamentally change the way we think about the role of electricity providers.

That was the message from the panellists taking part in yesterday’s Joint Plenary Panel Discussion at POWER-Gen Europe and Renewable Energy World Europe in Cologne.

“The genie is out of the bottle and the genie in this case is the energy transition,” said moderator Karel Beckman, Editor-in-Chief of Energy Post.

However he added that “the good news… is that there are lots of opportunities”.

Helmut Moshammer of Doosan Lentjes said that while it was hard to give a clear strategy for the next 10 years, the key business areas to be focused on were flexibility, technology and resources.

Emmanouil Karakas, president of EPPSA, a trade body of 20 thermal power plant component manufacturers, said bluntly: “We are not the bad guys.”

He said that in the new world of greater renewables intergration, thermal power had a vital role to play in providing flexible back-up, cost-competitive supply and security of supply.

Jim Lightfoot, chief operating officer for Gas-CCGT at EON Generation, also stressed that the turbulent changes of recent years were only “accelerating” and were “here to stay”.

And he added: “This transition isn’t cheap – so we have to make it investable. We will need a much clearer and stable framework to gain investor confidence.”

And he added that in terms of financing, the power sector was seeing entrants from the likes of pension funds, who were “taking a punt on the market” in the expectation that it had hit rock bottom and the only way was up from now on.

Jonas Rooze, lead analyst of European Power at Bloomberg New Energy Finance, said that the rate of change in the energy sector was so fast that “it is leaving people behind”.

The one thing we know for sure is that there is a huge demand for flexibility. The system will need to change – and how is the big question. The pie is getting bigger – it’s how it is distributed that is changing.”

Meanwhile, John Easton, vice president of international program at Edison Electric Institute, said the US was seeing many of the same issues as Europe.

And in answer to his own question, ‘what is our business going to look like in the future’, he said: “The customer is going to be king.” He added that for utilities to move forward they were going to have to become “market enablers and solutions enablers”.