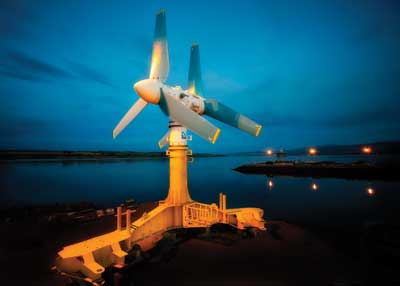 Atlantis Resources have received $10.5m from the European Commission to support roll-out of multiple tidal turbine arrays at its 400 MW MeyGen development in the Pentland Firth off northern Scotland.

The funding, awarded under the Seventh Framework programme for research and technological development, will underpin design, installation and operation of the company’s 1.5 MW AR1500 tidal energy turbines in the 3.5 sq km Inner Sound project site, where tidal current races through at over four metres per second.

“The award of this grant … will help to catalyse the [tidal] industry’s development, providing a credible and robust transition pathway from single turbine demonstration units, to the deployment of multi-hundred turbine arrays in Europe and across the wider international market,” says Atlantis chief executive Tim Cornelius.

Installation of the first six Atlantis turbines at MeyGen would begin early next year, with switch-on expected to follow “in late 2015 or early 2016”.

Atlantis’ 1 MW AR1000 turbine, a three-bladed machine standing 22.5 metres tall, weighing 1,500 tonnes and outfitted with an 18-metre-diameter rotor and permanent-magnet generator, has been put through its paces at the European Marine Energy Centre in the Scottish Orkney Islands and test-bench trialled at the National Renewable Energy Centre at Blyth.