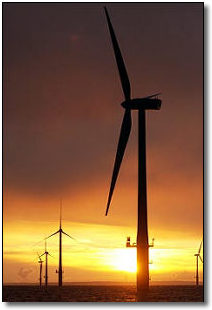 E.ON has installed the first of 80 turbines at the 288-MW Amrumbank West wind farm in the German North Sea.

The offshore wind facility will comprise of 80 Siemens wind turbines with a capacity of 3.6 MW each. E.ON began work on the $1.1bn project in January 2014.

The offshore wind park is located 37 km northwest of the island of Helgoland. The facility will produce enough power for as many as 300,000 homes upon completion, which is expected in the autumn of 2015.

Components are being transported to the construction site from Esbjerg in Denmark. Eon has also chartered a hotel ship to reduce transit times from the base ports of Esbjerg, Helgoland and Cuxhaven.

The developer added that commissioning work is being carried out on the wind farm’s transformer substation.

The German company has constructed a base on Helgoland from which it will manage the operation and maintenance of the plant.

The entire investment is around EUR1bn and E.ON says the Amrumbank West wind farm will help cut carbon emissions by as much as 740,000 tons per year.