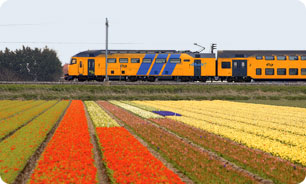 The Netherlands is seeking to run its entire electric rail system on 100% wind power within three years.

The wind power will come from within the Netherlands, as well as Belgium and some Scandinavian nations; part of the objective is to promote increased renewable energy adoption in other European countries.

TheInternational Energy Council predicts that if world governments stick to plan, wind power could account for 18 per cent of all energy production globally.