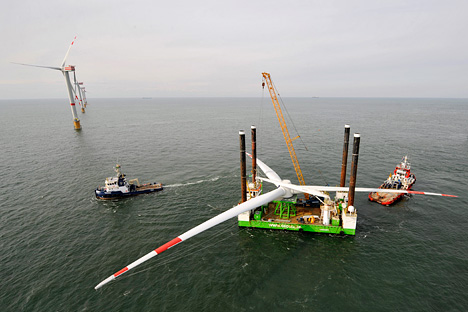 The European Wind Energy Association (EWEA) has reported a substantial dip in the number of offshore wind energy installations this year.

While 224 new offshore wind turbines, totalling 781 MW, were fully grid-connected in Europe during the first six months of 2014, that figure represents 25 per cent less than during the same period in 2013 (1045 MW).

Installed but not connected during this period were 282 wind turbines, making a total of 310 offshore turbines awaiting grid connection. Once connected they will add a further 1200 MW of offshore wind energy capacity.

“Despite offshore wind power installations being lower than in the first six months of last year, it remains the fastest growing power sector in Europe,” said Justin Wilkes, Deputy CEO at EWEA.à‚

“However, despite significant financing activity in the first half of the year, the contraction in installations we have witnessed in these first six months may well continue into 2015 and 2016,” warned Wilkes.

Wilkes called for more clarity in the shape of an ambitious deal on the 2030 Climate and Energy package by the EU’s heads of state in October, which he said “would send the right signal, making their decision particularly important for the offshore wind sector.”

Total installed offshore wind capacity in Europe is now 7343 MW in 73 wind farms across 11 countries, capable of producing 27 TWh of electricity, enough to meet the needs of over 7m households – or the entire population of the Netherlands.