Peter Terium, CEO of Innogy, called attention to these mega-trends last year. Koenig examines the three Ds through the prism of Germany as a key industrial nation, and suggests they will shape the power generation industry for years to come.

We are living through a moment of profound change. And not just politically. The very industrial structures on which modern Europe has been built are rapidly transforming, with no obvious end in sight.

This can be characterised by a change in energy consumption, as large factories close in traditional industrial areas like the Ruhr and services centres such as the financial hub Frankfurt go from strength-to-strength. The energy industry needs to adapt to this transition. But it isn’t as easy as it used to be.

Europe’s energy infrastructure is large and entrenched. And it’s much harder to refocus an existing system than to design one from scratch, as Europe did in the 19th Century. Or as developing nations are able to today. Yet huge infrastructure investments are being made across industrialised nations and much more is still ahead.

That’s why power professionals are gathering at POWER-GEN Europe and Renewable Energy World Europe in Cologne this June. We’ll be sharing insights that help the industry make sense of the energy transition – and making progress towards resolving the challenges it presents.

And this progress starts with an understanding of the three mega-trends that are shaping the future of the European power industry: digitalisation, decarbonisation and decentralisation.

It’s nothing new to note that the world is becoming ever more digitally-dependent. In fact, that’s one of the key drivers for such rapid change in our industrial landscape.

From e-commerce to e-government, everything is now online. And with this new landscape comes a new culture. The sharing and gig economies – characterised by the free distribution of information online and short-term employment arrangements, respectively – have disrupted established business models. And Germany is no different.

Take the country’s famous automotive industry, for instance. With brands such as BMW, Volkswagen and Mercedes-Benz, German companies have enjoyed a long history of dominance. But as smart vehicles enter the market, could that be about to change? Could that mean a shift away from domestic industrial suppliers and industry hubs such as Wolfsburg? And what would a transition to smart e-mobility mean forthe country’s electricity demand and load profiles?

Digitalisation is opening up new possibilities and changing how the power system functions. It is altering how electricity is used, how power is generated and supplied, and how the plants and systems for generation, transport, distribution, and storage are built.

Take new manufacturing technologies, such as 3D printing for example. 3D printing is far more flexible when compared with traditional production methods. It allows companies to make bespoke products more easily without having to rely on traditional manufacturing facilities – ultimately changing how much electricity manufacturers consume where, when and how.

Adidas produced 3D printed customised footwear for a number of athletes at last year’s Rio Olympics, and soon they will go on sale more widely. This is just a first step towards a change in the global and regional distribution of industries, as well as their manufacturing processes and, thus, energy needs.

This trend is being mirrored across the power industry where new technologies in manufacturing are likely to change the power industry’s system design and components, enabling cheaper, more efficient and flexible energy supply.

Decarbonisation is about climate, but also about primary fuel supplies and electrification. Germany’s Energiewende policy made it an early decarbonisation leader. From its use of nuclear to curb its dependence on fossil fuels, to its investments in solar photovoltaics, the country has long worked to diversify its energy mix and reduce carbon emissions.

Although the 2011 Fukushima disaster in Japan led Germany to turn away from nuclear and a resurgence of coal as a “bridge technology”, German energy policy remains driven by climate concerns and the country continues to be a decarbonisation power. This culminated in May last year, when for a short period German power needs were almost entirely met by wind and solar generation (renewables supplied 45.5 gigawatts (GW) at demand levels of 45.8 GW. Yet despite spending €25 billion per year for renewables support, Germany still has a very long way to go before it can rely on a decarbonised energy system.

So it’s important to realise that decarbonisation can provide economic, as well as ecological, benefits. When the oil and gas sector recovers from the downturn, there’s a chance that fossil fuel generation may become more expensive. And while renewable projects and other related technologies, such as energy storage and Power-to-X, can require significant funding to install, the cost isn’t tied to fluctuating commodity prices – potentially making it more reliable in the long-term.

Of course, economic and policy concerns can go both ways. And they recently led Germany to slow its investment in renewables growth amid concerns that development of the necessary infrastructure could not keep up, and electricity prices would keep rising despite oversupplied and depressed wholesale markets. But in the long-term renewables development should continue at pace.

And we should also consider security. In an era of geopolitical uncertainty, energy security is of paramount importance to countries around the world – and particularly in highly-developed European economies with large energy needs and too few competitive fossil fuel resources for self-sufficient generation. These regions will now be competing with other global players, such as China, when looking for an affordable supply of gas, oil and coal. So decarbonisation will stay on the agenda for the foreseeable future.

These two shifts combine to influence our third key trend: decentralisation. As industries change and the distribution of power consumption trends towards a growing number of smaller, smaller economic hubs, there is less of a need for large central power stations. In their place, expect to see an increase in small-scale generation.

And this is fueling innovation, from energy storage to smart meters and beyond.

Of course, progress never comes without risk. A society and economy that depends on electricity supplied by a highly complex, digitalised set of decentralised energy systems, opens itself up to potentially serious issues, such as cybercrime or systemic failure. Imagine if Germany experienced an extended blackout. Food supply, transportation, business and household services, even basic communications would cease to function. How long would society as we know it survive?

This is dramatic, but it’s a reasonable question. In response, the industry is taking steps to delivering secure solutions. Small-scale, decentralised generation depends on a robust and reliable grid to provide flexible power without blackouts. A smart grid complete with energy storage to capture excess power for periods of high demand and interconnectors to facilitate trading will be required to match supply to demand at all times. Questions remain, and energy policy at European and national levels has yet to provide a resilient market framework. For one thing, who should pay for security of supply?

It’s imperative that the industry finds answers to these questions, and gets the energy transition right – in Germany and around the world. Because this isn’t just about challenge. It’s about opportunity. And in this case, the opportunity is tremendous. It’s a chance to create a sustainable, flexible system that fits the needs of industry in the 21st Century – and enables innovation across all sectors.

Germany’s power sector has the chance to be the driving force for change. Harnessing the three Ds – digitalisation, decarbonisation and decentralisation – it can shift to a flexible, sustainable and reliable model that works for all. And enable new industrial models of the future.

Europe’s power sector is re-defining itself, aligning with the complexities of a digital age and opening up strategic and technical opportunities.

The POWER-GEN Europe and Renewable Energy World Europe conference and exhibition will take place on 27th to 29th June 2017 in Cologne. The event remains the destination of choice for stakeholders to gain and exchange key insights and make sense of the energy transition.

For more information and to register for the event please visit: www.powergeneurope.com or www.renewableenergyworld-europe.com. 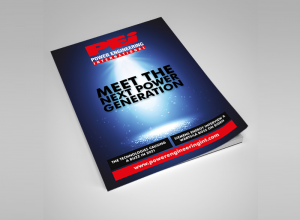