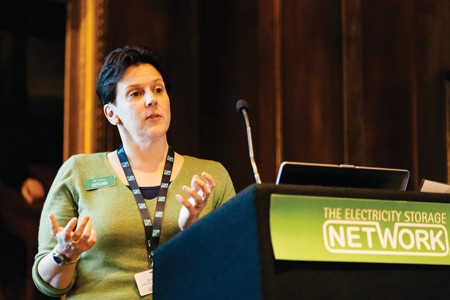 “It doesn’t take a rocket scientist, or even a nuclear scientist to understand why the nuclear industry might be fretting about electricity storage.”

So says Dr Jill Cainey, Director of the Electricity Storage Network, responding to some of the doubts being recently expressed about the technology’s chances of transforming the overall power generation mix.

Dr Cainey was made aware of some of the dissenting voices in recent weeks primarily in relation to the content of an article on Power Engineering International.

The story involved comments made by Michael Lewis, CEO of E.ON Climate and Renewables, who expressed positives about storage’s chances.

However that enthusiasm wasn’t shared by all, particularly the nuclear sector.

Many criticisms were vented on nuclear LinkedIn Groups towards the possibility of successful utility-scale storage.

These included opinions that the land-use requirements would be prohibitive, the problem of friction or stray heat losses (amounting up to 40 per cent of potential), and costs.

More ” “Perhaps, it is the influence of politics bleeding into strategy. The problem is that those in charge of policy may or are proceeding on the basis that cheap and large scale storage is just around the corner.”

Dr Cainey says such assertions fail to take into account such issues as flexibility and system design.

“It doesn’t take a rocket scientist, or even a nuclear scientist to understand why the nuclear industry might be fretting about electricity storage to say nothing of the fact that inflexible generation, such as nuclear, requires just as much flexibility, whether it’s storage or something else) as variable renewable generation.”

“It seems a little disingenuous for those from the world of nuclear generation to describe electricity storage as too expensive!” the Melbourne-based storage chief added.

Cainey told Power Engineering International that it is worth remembering that electricity storage is trying to enter a system that was designed to support “baseload” and that “baseload” provision is an activity that suits fossil fuel and nuclear, which has a “must run” capability.

“Thus, there is a vested interest from incumbent generators who have “must run” plant to ensure that we all believe “baseload” is essential.à‚  There are a number of research papers that model systems and show “baseload” is not a requirement, but you need flexibility and electricity and energy storage are forms of flexibility.”

There are commentators and industry players who believe that “baseload” is an outdated concept, including German-American energy storage technology company Younicos. The argument from that party to the debate is that a system with a penetration of 80-90 per cent renewables is secure.

This depends on the possible breakthrough of mostly decoupling heat from both gas and electricity and has increased the focus on inter-seasonal energy storage (moving summer sun to winter cold).

“I’m not personally a big fan of inter-seasonal energy storage,” says Cainey.à‚ “I think we might need some, but I think we probably only need longer storage, perhaps of the order of a month to ride out a calm cold spell ” such as the UK experienced last week.”

Electricity storage is unlikely to be baseload, and is, she says, best at providing rapid system services, flexibility and capacity at peak times.

Flexibility can be provided by gas engines, but they can only provide capacity, and cannot provide rapid system services or demand turn up.

“So high fossil fuel plant can provide flexibility but aren’t as flexible as electricity storage, so not as efficient, so look at the cost/benefit. This will only strengthen as the cost of electricity storage comes down, and remember batteries aren’t the only show in town.”

In terms of funding for projects, Cainey says recent announcements show it is happening. “In the UK we have the potential to triple our current electricity storage capacity and there are already five new proposed pumped hydro schemes in the UK for 2 GW. If the Quarry Battery model was repeated, plus tidal lagoons offer some storage, that figure would go higher.”

“As the EFR tender has shown, the incumbent companies and technologies are all scrambling to ensure they have a role in electricity storage.”
à‚