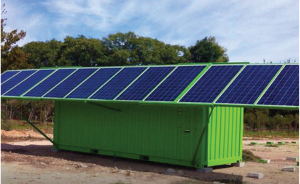 On-site renewables for power, heating and cooling are seeing rapid expansion around the world, according to a report released this week.

Renewable energy policy group REN21’s Renewables 2016 Global Status Report, which summed up the year in renewables for 2015, found that both developed and developing countries saw significant growth in decentralized renewable power in the residential and industrial sectors.

Cities and municipalities, especially in Europe and North America but also elsewhere, continued to emerge as global leaders in renewable district heating, with Amsterdam and Graz mentioned as notable examples. While renewable heating for buildings and industry grew by just 3% in 2015, biomass district heating in the Baltic states and Eastern Europe grew significantly.

And decentralized renewable energy-based systems continued to play a growing role in providing power for those without access. Off-grid solar markets were especially notable, with the pico-solar products market valued at $300 million and sales of roughly 44 million units across 70 countries.

Renewable heating and cooling was the one sector where REN21 saw a decline in growth, due partly to low global oil prices. Renewables supplied around 8% of the energy for heating and cooling worldwide, the report said, largely from biomass but also solar thermal and geothermal energy. Solar power was newly integrated into a number of district heating systems in 2015, largely in Europe.

Policy support for renewable heating and cooling remained far below support in other sectors, REN21 noted, with initiatives focusing largely on solar thermal heating options such as solar hot water heaters for residential and commercial buildings. à‚ Still, the report estimated that 47 countries had targets for renewable heating or cooling in place by the end of 2015.à‚