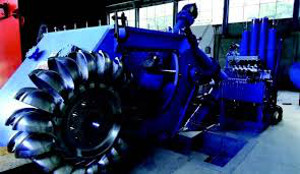 In 2008, members of the Development Trust conceived the idea of a hydro scheme to generate income for community projects. Featuring a Gilkes Pelton-type 450 kW turbine (pictured) and 150 metre head, it is one of the first community-led hydro schemes in Scotland. Expected to produce 1.3 – 1.4 GWh annually, the output will be exported to the grid.

The Park Authority’s proactive stance on micro-hydro schemes, including ‘ground-breaking’ Supplementary Planning Guidance for Renewable Energy introduced in 2013 to best coordinate with feed-in tariff arrangements. This approach has resulted in approval of 36 ‘run-of-river’ hydro applications by the National Park, 11 of which are now operational.