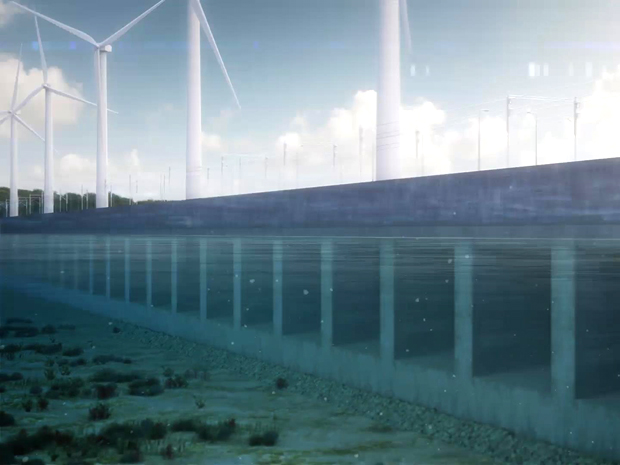 Beijing is turning its attention to tidal power, with one of its projects set to eclipse anything the world has seen in the sector so far.

The Wall Street Journal reports that the Chinese are planning to construct a $30bn tidal wall that could have an installed power base of about a gigawatt. The dam-like structure has turbines with curved blades that allow marine life to swim through while harnessing the energy in the water.

The project has domestic and international backing, including from the Dutch government and eight Dutch companies.

Plans of such dimension would enable China to surpass the UK, the current world leaders in tidal power technology.

The Chinese government has provided around $3m for feasibility studies for the tidal wall, but the full project wouldn’t be built for at least a decade. The turbine wall would run perpendicular to the coast and then extend out in a T-shape, covering 30 kilometers.

In other tidal power developments in the country, Lockheed Martin is also entering joint ventures in China in the ocean power market. It is developing a 10 MW ocean thermal energy conversion (OTEC) facility off the coast of southern China that is expected to cost US $300m to $500m.

That technology takes advantage of the temperature difference in tropical waters between the warmer surface and the cold, deep water. In most OTEC systems, ammonia is vaporized as it passes through a heat exchanger containing the warm water. The vapour spins a turbine and then the ammonia is condensed using the colder water.

Overall, Beijing has spent about $160 million since 2010 on ocean energy, compared to Europe’s private investment of US$825 million since 2007, according to the Wall St. Journal. Tidal and wave power are attractive technologies because they can provide baseload power, which intermittent solar and wind power cannot do.

On the downside the industry still has to overcome challenges associated with maintaining equipment in harsh salty waters and remaining competitive with other renewable power options.