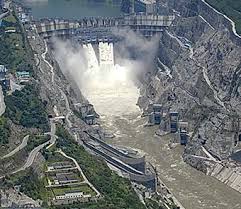 The operator of the 13.86 GW Xiluodu project announced full operation after completion of its eighteenth 770 MW Francis turbine.

Xiluodu began construction in 2003, with a temporary halt in 2005 while environmental impact studies were carried out.  State-owned China Three Gorges Project Corporation (CTGPC) built the plant on the Yangtze river in the southwestern Yunnan and Sichuan provinces.

At 287 metres, the project’s dam is one of the world’s tallest, and it is the largest arch dam in the world. The plant’s two power houses are situated on either side of the dam, and house the 18 Francis turbines and an air-cooled generator with an output of 855.6 MVA. The 1350-tonne generator has a rotor diameter of 13.7 metres and a height of four metres.

CTGPC said the plant will supply around 57 TWh per year to China’s eastern and southeastern regions via overhead power lines.

China is stepping up its hydropower construction, with its third-largest plant, CTGPC’s 6.4 GW Xiangjiaba, scheduled for completion this month and its next-biggest, the 5.9 GW Nuozhadu, coming online last week.

The nation’s largest hydroelectric project, the 22.5 GW Three Gorges dam, has been operational since 2008.