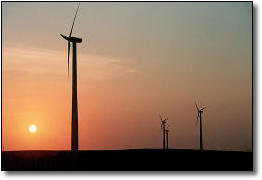 Beijing’s efforts to reduce smog and greenhouse gas emissions drove a strong demand for wind and solar power installations in the last 12 months.

FTI Consulting have compiled a report outlining how demand for wind turbines and solar panels soared in 2014, with Denmark’s Vestas, and China’s Trina Solar and Yinglie Green Energy benefiting from the drive.

China is attempting to make renewables account for 15 per cent of its power mix by 2020.

FTI reports that Vestas leads globally for the second year running in the amount of turbine generating capacity it sold.

Germany’s Siemens was the second-biggest turbine maker last year, followed by China’s Goldwind and General Electric of the US.

The top three solar panel producers are now all Chinese, with JinkoSolar displacing Sharp Corp of Japan for the third spot. Canadian Solar is fourth, and Sharp is now fifth.

The upsurge in demand for wind farms was also assisted by a fear that a subsidy cut could be on the way in 2015 – it led to 50 GW of wind generating capacity being installed in 2014, and increase of 40 per cent on the 2013 figure.

Global production of solar panels rose by 30 per cent last year thanks in large part to China’s simplified approvals and permits for solar generation from buildings and other decentralised sources, said Ankit Mathur, project manager for alternative energy at GlobalData, which tracks the solar industry.

Japan, the Caribbean and the Middle East are also looking at large-scale solar generation, thanks to dropping costs.

Both industries continue to be dogged by underlying problems despite the positive performance. The wind industry could be in for a difficult time in the US if the government opts to remove wind power production tax credits.

Meanwhile, even with the increased demand, solar manufacturers are being plagued with severe overcapacity. GlobalData estimates 15 per cent more panels are manufactured worldwide than is merited by demand.