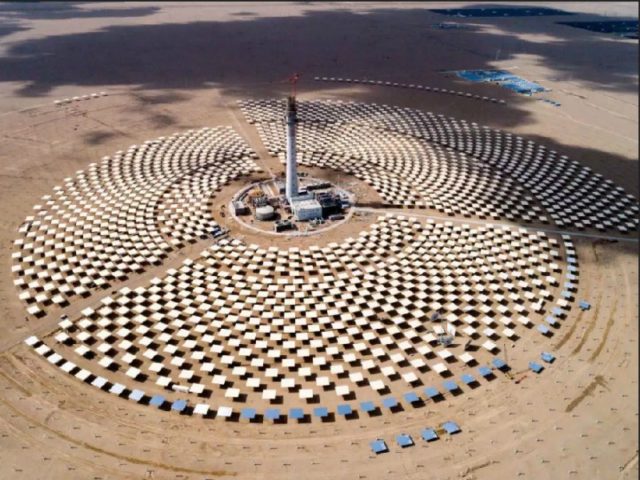 The Luneng 50 MW Concentrated Solar Power (CSP) project at Haixi has been completed and connected to the Chinese grid. This is the fifth project of its kind, with China recently installing 300 MW of CSP, in an effort to meet climate goals, as well as boost the local CSP industry in the country.

The Luneng tower project is based in Quinghai Province near Tibet, which has the best solar resource in China and incorporates 12 hours of thermal energy storage in molten salts.

Construction began in June of 2017 and took a little over two years to complete.

The CSP tower forms part of a multi-technology renewable installation designed to achieve an optimal combination of wind, light, heat and energy storage, to improve energy efficiency and iron out peak demand periods.

Of the 300 MW CSP project installations, nearly all (250 MW) have chosen tower CSP technology, and only one so far has selected the more tried and tested trough technology; namely the 50 MW project at Delingha by China General Nuclear.

The other CSP projects include SUPCON’s 50 MW at Delingha, 50MW at Gonghe,  and Shouhang’s tower at Dunhuang, including 10 MW is in Gansu Province, providing power to larger cities such as Beijing and Shanghai.

CSPFocus commented on the installation; “Through complementary multi-energy operation, the peak shaving pressure of the power grid can be effectively reduced. Considering that the output limit is matched with the load curve of Qinghai Province, the project will significantly reduce the power-limiting ratio through energy storage and CSP adjustment.”

Spanish based firms Abengoa supplied the solar field, and SEPCOIII acted as Engineering, Procurement & Construction lead on the Luneng project.