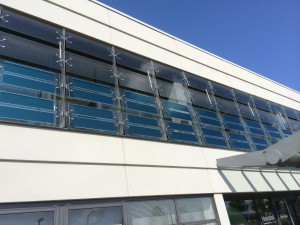 The largest BIOPV (Building Integrated Organic PV) installation of its kind has been commissioned at the Helitek headquarters in Dresden, Germany, featuring the company’s HeliaFilms  laminated into glass by AGC Glass Europe.

The headquarters of the company, spun off in 2006 from the Technical University of Dresden and the University of Ulm, was chosen for installing the first glass façade using the organic thin-film solar photovoltaic (PV) material and is used on an East facing façade in order to demonstrate the superior harvesting factor under the less-than-ideal mounting conditions that often occur in BIPV applications.

A data logging system tracks the films’ and ambient temperatures and solar irradiation as well as the power generated. It will be directly consumed by Heliatek to power office illumination throughout the year.

The company claims the world record efficiency of 12% for OPV films.

‘Organic PV is much less energy intensive to manufacture compared with crystalline silicon and HeliaFilm® is ideally suited for glass curtain walls of all kinds. Its superior low light sensitivity and excellent high temperature performance makes it the material of choice for a number of BIPV applications,’ said Frederic Bonnefoy, Product Manager Active Glass at AGC Glass Europe.