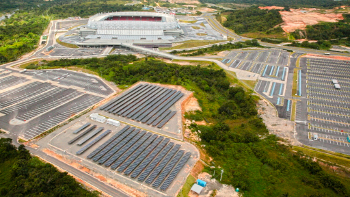 The Brazilian state of Pernambuco has announced that it will buy the electricity from solar photovoltaic (PV) projects resulting from its first solar auction, having failed to find buyers for the power.

“Traders did not present themselves to buy the energy, so we made the decision that the state will buy it,” Pernambuco’s infrastructure secretary Joao Bosco de Almeida said in a Bloomberg interview. “Our intention was to introduce solar energy into Pernambuco’s energy mix, and we did it. The state already had a Plan B.”

December 2013’s reserve capacity auction awarded contracts for the construction of solar projects with a total capacity of 96 MW. Among the winning bidders was Italian firm Enel Green Power, which agreed to a 20-year power purchase agreement at an average price of 228.63 reais ($102.53)/MWh.

According to analysts at Bloomberg New Energy Finance, prices for solar power in Brazil are dropping, but are still around 75 per cent above the prices offered in the nation’s wind power auctions, as solar technology is costly and relies on imported technology. Pernambuco’s 20-year contract also put buyers off, BNEF said, given that wholesale buyers in Brazil’s energy market usually sign contracts for 10-year terms or less.

According to Almeida, one of the auction’s winning developers no longer plans to build its two proposed solar farms. The other four projects are expected to come online next summer.

Brazil aims to auction 3.5 GW of solar capacity by 2018, with the next solar auction planned for October. The nation’s ambitious target is expected to catalyse solar growth in Latin America, according to analysis firm IHS Research. In its latest Emerging PV Markets Tracker report, IHS increased its solar installation forecast for Brazil to 1023 MW in 2018, up from 167 MW in 2013.